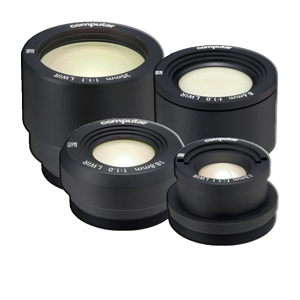 The Thermal Lens Series has a practical transparency between 8-12 μm wavelength (LWIR) and offers an optional DLC Coating - engineered and tested to withstand extreme environments such as rain, saltwater and extended exposure to UV light. In addition, the proprietary “Athermalized” design allows the lens to maintain consistent focus and resolution during dramatic temperature changes (-4° F~158°F).

“As a market leader, Computar brings 40 years of experience in pioneering lens design and manufacturing to this series” according to Nick Kushiro, Computar Optics Group “These new production technologies greatly reduces cost and speeds development time of OEM products, at no loss of performance for the customer.”

To view the Thermal Lens Series, go to our online catalog.

About Computar
Computar lenses have set the world standard through pioneering design, manufacture and global sales. Computar lenses were introduced in the USA during the mid-1970s and have continued to meet security challenges globally for more than 30 years. Security professionals with high-security applications such as airports, banks, government buildings and commercial industries choose Computar for state of the art technology, quality and reliability. With millions of installations worldwide, there is a Computar lens for virtually every application. With USA locations in NY and CA, Computar is able to meet the needs of the North, South & Central American markets.